Why is Diversity of little value without Inclusion and what prevents Inclusion? 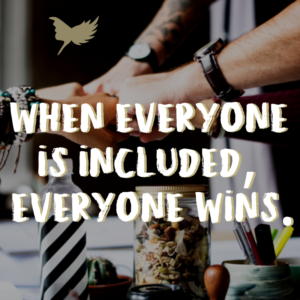 So, we all know that diversity is key to innovation, that homogenous companies are just not able to innovate at the level of heterogenous companies. For the rich idea’s innovation calls for a company needs rich thinking that only diversity is able to provide. Diversity extends beyond age, racial, gender and religious lines to social class, education, rank and ideology. Every layer of diversity adding to the richness it brings to thinking for innovation. Diversity without inclusion though is as counterproductive to innovation as homogeneity and dooms a company to failure due to the dissatisfaction of unharnessed employees. Inclusion enables the receptivity of the diverse thinking required to transform the status quo. Its inclusive and diverse businesses that will thrive in the future not diverse businesses.

Why then are we not naturally inclusive, harming our ability to innovate? And even when we think we are being inclusive why are we most times not even consciously aware of the vast filters of unconscious bias through which we view the world?

What then is inclusion:

The Collins Dictionary defines inclusion as the act of making a person or thing part of a group or collection. It means that simply having diversity at the table is meaningless unless all at the table feels that their seat is equal and that their views are authentically respected and valued. That these views are considered beyond the haze of unconscious bias and action is taken to change the menu accordingly.

How to cultivate inclusion:

The starting to point is to become aware of the fact that you have your own Model of the World. In fact, we all have our own Model of the World. This MOW has been developed from birth and is largely molded during our 0-7 years where we were technically in a state of hypnosis according to Dr Joe Dispenza. Through environmental experiences and unique meta-programs, we cultivated our “rules” as to how the world should be. Rules unique to us as no two people have the same cognitive processing meaning each person experiences events uniquely and makes a rule accordingly, rules influenced by culture, media, social, school, friends, family and so forth. Your MOW is neither right or wrong, it is simply your model of the world and the rules that govern how you unconsciously see and process the world around you.

These rules through which you filter the world were formulated at time when your consciousness had not yet developed and thus you may not even be aware of your own rigidity of thought. Dr Bruce Lipton states that over 95% of our daily functioning including thought is unconscious programming. Many studies have been done to illustrate this including one by Adam Grant whereby math’s papers with names on yielded higher results for boys and with names off they yielded higher results for girls. Girls themselves though have just as much bias as boys when it comes to gender. A study done in Australia asked 1 500 managers to picture a CEO, 97% of the equal number of men and women said middle age white male and only 3% said female.

“The American theorist Myron Tribus put it well: “What you see depends on what you were thinking about before you started to look.” According to a popular quote from Einstein, the world as we have created it is a process of our thinking, and it cannot be changed without changing our thinking.

What if we don’t cultivate inclusion:

If we don’t cultivate inclusion we fail to innovate, we keep ourselves within our own fish bowl world and rob ourselves of richer thinking, richer ideas and more prosperous innovation. In addition, we stump the growth of our human intelligence, our ability to think and feel emotionally, skills that A.I. can’t replace and that are becoming increasingly sought after by the world’s leading innovators including Amazon and Mircrosoft. “Employers want to understand how your mind and emotions wrap around a process, concept or problem. Do you ponder an issue solely from your background (i.e., data science, engineering, marketing), or do you shed your biases, go beyond your technical training, and view the picture from different perspectives?”

An inclusive culture starts with inclusive leadership. Next week we will explore the role of leaders in cultivating inclusion in a world awash with too many managers and too few leaders to guide us into the Exponential Age.

How We Can Help